My host mother asked me if I would like to attend a traditional Moldovan nunta, or wedding, over a week ago for a couple of family friends and right away I accepted. I had heard through volunteers and the Peace Corps staff that the weddings in Moldova are lavish, where the family of the bride and groom spare no expense. In review, I believe the rumors to be true and that the majority of other weddings follow the same framework of the one in which I attended. Weddings here are more than just the celebration of two people and a marriage to be. It is entertainment of the highest quality for all the guests to indulge in.

What came first was the food. The tables were started with sliced fruits and vegetables, pasta salads, whole grain breads, all different cuts of meat: smoked sausage, beef patties, short ribs, chicken, fish, cocktail shrimp, bottles of cognac, pitchers of red and white wine, soda, and dishes of cookies, cakes, and candy. This would have been sufficient. However, the food never stopped arriving. I felt like I was at a Brazilian steakhouse with a wooden peg in my hand pleading for the waitstaff to halt their deliverance, except the signal held no value. Soups, placinte, salads, and more meat were stacked plate on top of plate filling the entire table. Despite being delicious, the majority of the food was left uneaten. This countered the cultural norm of not wasting food. I am hoping that the food was refrigerated and preserved for later use, but if not, hopefully the street dogs of Cahul were able to pick up a scrap or two. 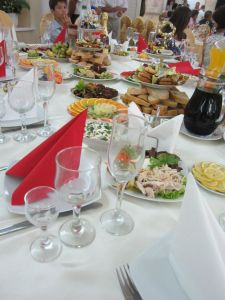 Unlke all of the weddings I have attended in the United States, a dance team was arranged to perform. As the bride and groom sat at their table on stage, a group of 3 boys and 3 girls performed traditional Moldovan and cross-cultural dances for the couple. Each dance was chereographed and involved a medley of music.

Around midnight the wedding was only half way to completion. Protocal for a Moldovan wedding is 6pm-6am. Dancing, toasting, gifting, eating, and drinking last until sunrise. By 3am I was very groggy. Receiving only 3 hours of sleep the night before, I was not sure I could power through. However, with coffee, Coca-Cola, a pair of swinging hips, and motivation on my side I somehow managed to persevere until 6am.

Dancing the Hora is a Moldovan custom where people interlock hands and move in circles together to the music.

When the hall closed and everyone left, I said my goodbyes and thanks and hopped in a taxi with my host mother and her granddaughter. I was under the impression that we were leaving the city of Cahul en route to our house in Leova. I was mistaken. The taxi headed to an afterparty. Yes, that is right, an afterparty at 6 in the freakin’ morning!! You would think after 12 hours of dancing, drinking, and eating, people might be tired. Think again. These people were machines programmed to celebrate. With my eyes feeling weighed down and my mind racing in all sorts of directions, I found myself at a picnic table in front of the afterparty house. Staring up at me, a bowl of chicken soup. Standing across from me, a proud father of the bride with two shots of cognac in hand.

No excuses could be mustered. I saluted the father of bride and thanked him for an eye-opening experience filled with entertainment, amazing food, dance, and culture. The party was a success and for me it was incredible to have been able to take part. When we left from the afterparty it was 8 a.m. and we still had to drive up north to Leova. After two hours in the car with my host mother I arrived home at 10 a.m. completely drained, yet satisfied.

Although my sleeping schedule was drastically altered, all of it was worthwhile and now if another invitation happens to come my way, you will know where to find me.

3 thoughts on “My First Moldovan Wedding”