Over the past two years I have been living abroad. In 2012, I spent four months in Guadalajara, Mexico learning intensive Spanish and for more than 1.5 years I have been volunteering in the Republic of Moldova learning Romanian. In this time, I have been able to study both languages to intermediate and advanced levels and currently I speak Romanian in my every day professional and social life.

Learning any foreign language will take a great amount of time and effort studying structure and grammar, but if you follow some of these insider tips you will progress much quicker than you think. Suerte! Noroc! Good luck!

1. Learn how to conjugate verbs first.

One huge mistake I made at the beginning of learning Spanish was trying to memorize vocabulary. I would walk around the room at my host mother’s house in Mexico with note cards and a pen writing the names of all the objects that appeared. Within one month of being in Mexico I could point to a chair and tell you it was a “silla” but I could not tell you how to sit down in one. With the help of my roommates Chris and Will, they pointed me in the right direction. I was told to learn how to conjugate verbs first in order to describe everything about the object I wanted to know. What resulted was not only an ability to communicate better, but any time I went through the practice of describing the object with locals and they gave me the answer, my retention rate on that term increased significantly.

The website that really helped me to conjugate verbs was Verbix.

2. Use the right types of resources.

Sometimes we will see a word in text and become confused on its utility. Other times we have just never heard of the word at all. The best resource for finding a word’s definition and then see how its placed into context is WordReference. It has helped me to not only learn unidentified words, but more importantly to use them correctly thereafter.

Normally I am not a fan of language learning sites with audio verification, but using Memrise and Russian For Free helped me to establish a novice base in both the French and Russian languages. By continually repeating words and expressions to my robot friend, I realized that when I stepped away from the resources for days I was still able to retain the knowledge I had gathered.

3. Do not use translators!

Absolutely the worst thing you can do. By placing text into a translator you are not applying any pressure on yourself to learn. You are throwing it through the system effortlessly and, I hate to break it to you, the majority of answers you receive are inaccurate. By not training your brain to conjugate the verb or understand the nouns or adjectives you do not know, the further you will be left out of interesting conversations in the foreign language you are attempting to learn.

The translation is wrong!

4. Take notes in the foreign language you are learning.

My notes in Romanian.

5. Speak with natives of the foreign language you are learning.

Do not practice a foreign language with people of your home country. I have seen people attempt it and the same problems reoccur constantly. Either both language partners are at the same level or one becomes the other’s tutor. The biggest problem is that both were taught the language in a formal setting, which makes understanding colloquialisms and idioms very difficult.

Break out of your bubble and engage! I know it is scary, but do it. If you are living in a foreign country, take advantage of the opportunity. Join a club, go on a date, go to local events, speak with someone studying on your campus or at work. In both situations in Mexico and Moldova I have been able to live with host families. They were and still are the greatest language learning resources imaginable. Even when I do not speak with my host directly, I am able to learn from his conversations with other visitors. 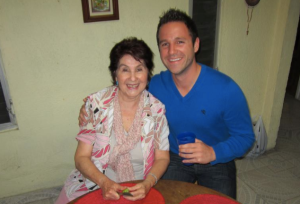 Finally, learn to accept criticism. The faster you shed a perfectionist’s attitude and can make fun of yourself, the faster you will learn. This is coming from a recovering perfectionist. This piece of advice not only applies to language learning, but life in general.

7 thoughts on “5 Tips for Learning a Foreign Language”