Standing by the food table at the University of ASEM in Chisinau, Moldova, I was making a tough decision on whether to choose a potato or cheese pastry (infamously known in Eastern Europe as placinta) when I came upon two high school students with great smiles on their faces. Those two were Tamara Ceaicovschi and Tudor Petrici. We greeted one another and began having a small conversation. I noticed that there were not any plastic cups left for water, so I asked Tudor if he knew where I could find one. He shook his head no, but then offered me his. Not thinking twice, I took his cup, thanked him, and we shared a laugh. Both he and Tamara were very warm people and engaging in our discussion, which quickly shifted to their project. They told me that they had created a bicycle business concept. Immediately, I knew who they were. Before the live presentations on this day, two volunteers and I were in charge of proofreading all business concept papers that each team was required to submit. I had the privilege of reading theirs.

The bicycle business concept focused on receiving a donation of 500 bicycles from Pedals for Progress to be shipped to Moldova at the outset. From there, the team decided it would sell the bikes to locals in need of transportation and establish a repairs shop in their community of Grozesti. I remember loving their well-written English concept paper. I provided the team with this exact feedback:

Tamara and Tudor took the constructive criticism in stride, which was very impressive considering most business professionals cannot. They mentioned they would add bike tours and rent out some bikes to be more sustainable. We discussed their plan in-depth and even joked around about our favorite foods from Moldova. Our meeting came to a quick close as we were all gathered back into the main room to hear which teams would be the top three finalists of the pitch competition. The teams selected would have to present their concept one more time to a panel of 11 judges and a room full of 100+ attendees, increasing the pressure. Unsurprisingly, Tamara and Tudor’s concept was selected as a finalist.

Their team got back on stage and excelled in presenting their concept. Even better was their approach to answering some very difficult questions from the panel of judges. One judge was critical of Moldovans riding bikes in the winter months. Tudor looked at the judge and told him that Moldovans will ride bikes in any weather conditions. I laughed under my breath having witnessed it personally. 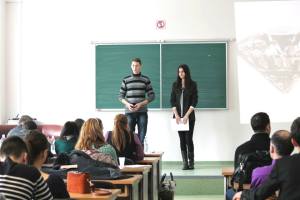 After all the teams presented, the judges named the winners. Tamara and Tudor went up against two very strong competitors, but prevailed. The looks on both of their faces were priceless. Both of their mouths dropped in astonishment. They looked at one another in disbelief, then embraced in happiness. I remember feeling so good for these two kids. They placed a great amount of effort into their concept paper, performed admirably at the live competition, and are just two fantastic people to boot. I was elated and so were they.

In winning the national competition Tamara and Tudor now have the opportunity to compete in the final competition at the University of Delaware in April against high school teams from the United States and one team from Kenya. As a member of the Diamond Challenge Moldova steering committee it is my responsibility to get our team to Delaware. With 11 days remaining to raise funds we need all of the help we can get. Currently, we stand at 24% funded ($1,335 of $5,500 raised). We have created an Indiegogo campaign where you can contribute funds safely and securely now. If you have any questions, please leave me a comment or write me an email at patrickmiller14@gmail.com.

Please donate to our cause and help fulfill Tamara and Tudor’s dreams of visiting the United States, improving their business skills, and allowing them to represent their country in the international competition.