Playing basketball with the guys one day after work, I was approached by Alex. He and I were acquaintances through a family I spent quite a bit of time with in town. He waltzed over to me on the court and asked if I could help him to improve his English. Based on trial and error, I was a bit hesitant to agree at first. Having ran an English club for over a year, I had witnessed plenty of intermediate level high school students disappear within the first two weeks of lessons. Alex, however, was not one of these cases. He was proficient, but nothing prepared me for the expectations he was about to shatter.

Alex, a 22 year old university student living in Leova, was eager to begin lessons as he strived to work and travel abroad in the United States. In Moldova, it is very common for students to migrate to the United States for the summer then return home with new experiences and skills to share with their peers.

In preparation for the first session I asked Alex to come with a notebook to the business incubator in our town. He did so after finishing up work at his family-owned construction materials supplier. Our opening lesson began with us watching the film Inside Man with Denzel Washington. The goal for the lesson was to turn on the English subtitles with English audio as Alex wrote down terms and expressions that were confusing to him. Meanwhile, I kept a log of the vocabulary I thought was difficult and jotted down questions related to the plot and characters. We would then pause the film every 20 minutes for review. While studying Spanish intensively in Mexico, I always found this training tool extremely useful. It allowed for me to engage in the story, hear how the colloquial language was spoken, and see how the dialogue was written.

Alex was a decent speaker, but an exceptional learner. He kept long and detailed lists with plenty of questions. I enjoyed that he asked them freely. It was a strong sign of his intelligence and fearlessness. Many students shy away from asking questions out of the fear of looking dumb. It actually works inversely. Alex tore away at the task, sticking around for two hours at the first session.

Over the next few weeks, Alex kept picking up steam in formal lessons. He enjoyed the film sessions and even came to the business incubator on off-days just to have free discussions. We spoke about life and the future between Russia, the European Union, and Moldova. He was an excellent diplomat and knew how to articulate all of his political arguments without hesitation or becoming too emotional. I noticed his progression in English after each lesson, which made me feel incredible as an instructor.

In March, Alex was scheduled to interview with Hilton Hotels through Acord Travel to work in Ocean City, Maryland for the summer. He had never conducted a formal interview before and we agreed to run through the practice questions he was given. The catch was that we would not be meeting at the business incubator for a change. Instead, Alex invited me into his home for a family dinner before our preparation. His mother greeted me at the door with a smile. The family spoke Russian amongst each other, but Romanian with me. At the table his mother served us towering plates of duck, potatoes, buckwheat, salad, the infamous meat jello, and a bowl of soup. After stuffing our faces and bellies with food we sat back for dessert. At one moment, I could not help but chuckle to myself when I noticed our dialogue as a trio. His mother was cleaning dishes at the counter speaking Russian to her son, Alex would then begin speaking with me in English, and I would make a return comment to his mother in Romanian.

The first practice interview held a list of 20 questions. As we began going through each question, I started to notice mistakes. They were not related to poor grammar or improper use of vocabulary, as I would have expected. They were a lack of confidence and lackluster disposition on Alex’s behalf. It felt like we were at the dentist’s office and not on stage to a dream. At one point in the interview, I paused and provided him with this feedback. Having good posture, smiling, projecting voice, and being engaging would elevate Alex during his interview. It did not quite set in during this session. We decided to call it a day and schedule a meeting on a later date.

Two days later, Alex wanted another trial run. Yet again, we got together at his house. I was spoiled with rabbit and all other sorts of Moldovan cuisine goodness, but I digress. Alex and I set up for the interview and this time he meant business. I pretended to be the employer and asked him what he wanted out of his work and travel experience. I loved his answer. He said that he wanted to integrate further into the U.S. culture, improve his English, do a great job at Hilton, and bring back his findings to improve his family business in Moldova. When asked what he knows about Hilton Hotels, Alex was able to provide plenty of historical information about the company and even rattle off the acronym for Hilton: Hospitality, integrity, leadership, teamwork, ownership, and now. I laughed and told him, “you’re hired!”. We both started cracking up and gave each other a high-five.

In mid-March, I left Leova for the capital of Chișinău. As I was walking to my friend’s apartment in the early evening, my phone sounded. I looked down and saw the call was from Alex.

“Hey Patrick. I wanted to tell you that I got the job. Thank you for your help,” Alex replied.

“I will see you back in Leova. Have a good night,” he replied with excitement in his voice.

I went numb for a moment and had to take a brief pause. I felt so great hearing of his success. It made my evening. I walked slowly into the night with my hands in coat pockets towards the bus, proud to have played a role in a new friend’s dream. 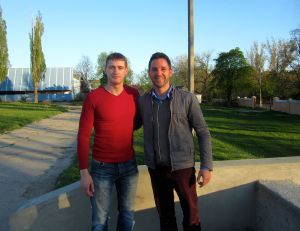 Alex and I at the football stadium in Leova

Alex’s work visa was approved last month. He leaves for Ocean City, Maryland on May 20th, where he will work at Hilton Hotels until September.