In the spirit of the holiday my host mother Rima gave me this thoughtful bowl of sweets in memory of my grandparents on this day. She told me that the gift was in honor of each one and that I should take a moment to remember their lives. 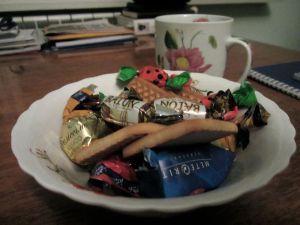 Unfortunately, I never met my grandpa on my mother’s side, Vincent Purtell. He was apparently the nicest man around and a great conversationalist. I would like to say I try to be as good of a person as I can and definitely took on his gift to gab. May he rest in peace.

My grandpa on my father’s side, Jack Miller, passed away when I was seven. He was a very irritable man, liked to watch “The Price is Right”, and yell at my brother Mark and I when we came to visit. Mark and I sought revenge, so we hid in the basement one afternoon. We waited for him to come downstairs to have a cigarette and watch TV on the couch. Hiding behind some large chairs we began howling like wolves. The old man got really nervous and yelled at the animals in the distance. Mark and I looked at each other and on the count of three popped up from our crouched positions and screamed at him as loud as we could. Our grandpa almost had a heart attack as he whaled just as loudly and fell back on the couch. Mark and I laughed hard, and then ran upstairs. Although I never built a memorable relationship with Grandpa Jack, I do thank him for giving birth to my father and all of my uncles and aunts. May he rest in peace.

Grandma Mary Purtell was a wonderful woman. She lived to be 92 and never let her smile, infamous candy dishes, or boxes of Fannie May chocolates run out of stock. While she did own some of the scariest clown and stuffed animals I had ever seen, she also had one of the coolest houses to explore. I remember crawling through her laundry shoot and riding a small Goodyear blimp on wheels in her basement. Mark and I also invested lots of time picking away at a table she owned that had thousands of pennies glued to it. We were some little rascals, indeed. Grandma Purtell was an amazing woman. I cannot remember a time when she was not dependent on a walker, but it never broke her spirit. She continued to fight despite her physical limitations. It impressed me at a young age and I attempt to embody her spirit in the present. During my senior year of high school, my dad approached me after a baseball game and told me that she passed away that morning. A lump caught in my throat and I had to take a long pause to collect myself before packing up my equipment. The funeral was that next Thursday and I remember our team was playing one of our rivals, Maine South. On the mound was current Chicago Cubs pitcher Brian Schlitter. Not being able to play in that game killed me, but I heard the news that our team had prevailed. The victory symbolized Grandma Purtell’s never give up attitude for me and I remember the funeral being a celebration more than mourning. Both of my uncles John and Tom gave powerful, comedic, heartfelt speeches of Mary, which put me in a good place. May she rest in peace.

I also created a great relationship with my grandma Mary Jane Miller. She was like a mother to Mark and I growing up. My mom Evelyn died of lung cancer when I was five. This made the roles of my grandma and aunts Lois and Luanne ever more important. Grandma Miller always had time for us. I loved going over to stay at her house because she welcomed us with open arms. She made popcorn from scratch, egg salad sandwiches, and ice cream sundaes for Mark and I all the time. We played board games, watched baseball, and sat at her favorite coffee table just to chat with her for hours. When the time came for Mark and I to get some air we would head out to the backyard to play a modified version of one-on-one whiffle ball. Grandma Miller’s house was perfectly situated behind St. Nicholas church in Evanston, Illinois. Mark and I would lob the ball up to ourselves and try to hit the ball on the church’s roof. Very rarely did we succeed. The holidays were also great, as my grandmother would whip up a classic Thanksgiving feast for our very large extended family rather quickly. The turkey, stuffing, and cranberries always came out perfectly, but it was her deviled eggs that put everything over the top. The lasting memory I have of my grandmother, before she passed when I was 14, was the time I rode my bike to her house one summer day. I woke up early in the morning and decided to ride my bike from my house in Skokie to hers in Evanston, threes miles in total distance. The goal was to surprise my grandma. When I arrived at the front of the house, I parked my bike on the side, walked up her porch steps, and rang the doorbell. My grandma came to the front door. I saw her face light up with excitement through the glass panels of the door. She asked me where I was heading to in Evanston and I responded, here. She smiled, gave me a kiss, and pulled me in for a strong hug. We spent the rest of the afternoon passing time together. Later that night, I received two calls from my aunts Lois and Luanne and they told me that I had made my grandma’s day. It made mine too. Her passing was extremely difficult for the entire Miller family and me. When the casket finally closed, I could not hold myself up. I cried very hard for her. She deserved it. Another strong lady, the backbone of the Miller family, had left us. On this day, I remember her. May she rest in peace.

For all of you who have had outstanding grandparents or are still with them today, please take a moment to remember them, and thank them for this gift they have given us all… life.