Valentina Brega is the owner of TLC Language Center in Chisinau, Moldova. The center provides English courses to adults. Valentina graduated from Wofford College in South Carolina, USA in 2009, majoring in Finance and German. Over the past two years I have had the pleasure of consulting for TLC Language Center and building a strong professional relationship with Valentina. I asked Valentina five simple questions about Doing Business in Moldova to enlighten new Peace Corps Volunteers and give potential entrants into the market a glance at the international secret otherwise known as Moldova. 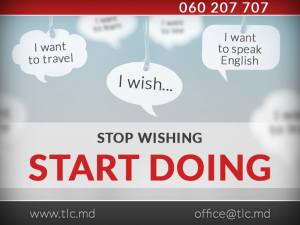 1. What are the benefits of doing business in Moldova?

Moldova is becoming more interesting and attractive to foreign investors. It offers a variety of benefits:

– There are also many people who speak fluently in Italian, given the fact that many Moldovans have either worked in Italy or have family members working there.

– Easy to find people fluent in French, Spanish, and German

– Relatively low wages, some would argue that the wages in Moldova are amongst the lowest in Europe

2. What are the largest obstacles of doing business in Moldova?

– High level of corruption. Despite many actions that have been taken against it, corruption still remains a big problem in Moldova.

– Changes in Moldovan politics. Political instability could be a problem over the long-term. While the current government is working towards strengthening our relationship with Europe, there are political parties that have different visions and goals to strengthen our partnership with Russia. The population of Moldova is torn between the two options and the results of upcoming elections are hard to predict. Changes in politics may affect changes in business legislature.

– Moldovans understand that the wages they can receive in Moldova are very low compared to in other European countries. They will work abroad at lesser positions if they are paid higher salaries.

– Due to high migration, some regions in Moldova are deserted with no work force available.

3. How can a foreigner establish sound business relationships in Moldova?

I cannot say much about this since I am Moldovan, but I would encourage anyone interested in doing business in Moldova to visit the country and get a sense of its business environment and people. I would also encourage speaking with other foreigners who have been on this path before.

After graduating from college, I returned home to Moldova and my first job was with a Dutch company. My job involved finding international experts for projects funded by the European Commission and other donors. What I liked most about working with a foreign company was the intense training we received in order to reach European standards of work: e-mail communication, resume screening, proper customer service etiquette, meeting short deadlines, multitasking, etc. The company grew very quickly, and the European and international donors were pleased with the quality of our work.

Why would Moldovans be hesitant working with foreigners? I do not think they are. I think Moldovans look for opportunities to work in foreign companies – the salary is usually higher, there are no delays in payments, and there is potential for career growth.

4. What are some of the best-kept secrets about Moldova and its workforce?

The workforce is mainly concentrated in the capital – Chisinau – making it more competitive than other areas of the country. It is more possible to find good specialists in the capital (depending on the type of business). Good specialists, however, are not cheap, even in Moldova. They are well aware of their worth in other countries and ask for salaries close to the ones in European countries.

5. What advice would you give a new entrant into Moldova?

Develop a strong professional network who have been through the whole procedure of opening a business in Moldova. If you do not know anyone, a simple Google search should suffice in order to identify foreign companies operating in Moldova. Contact other foreign business people before coming to Moldova and ask them to share their experience with you. Once you are in Moldova, get a sense of Moldovan traditions and customs. Moldovans typically respond positively to foreign companies investing in the country, and appreciate it when foreigners show respect towards our people and our values.